I got a thinkpad x260 and installed Debian GNU/Linux 8 (which I also use for my desktop and servers).

Here are some tips for someone (or no one?) who wants to do the same. 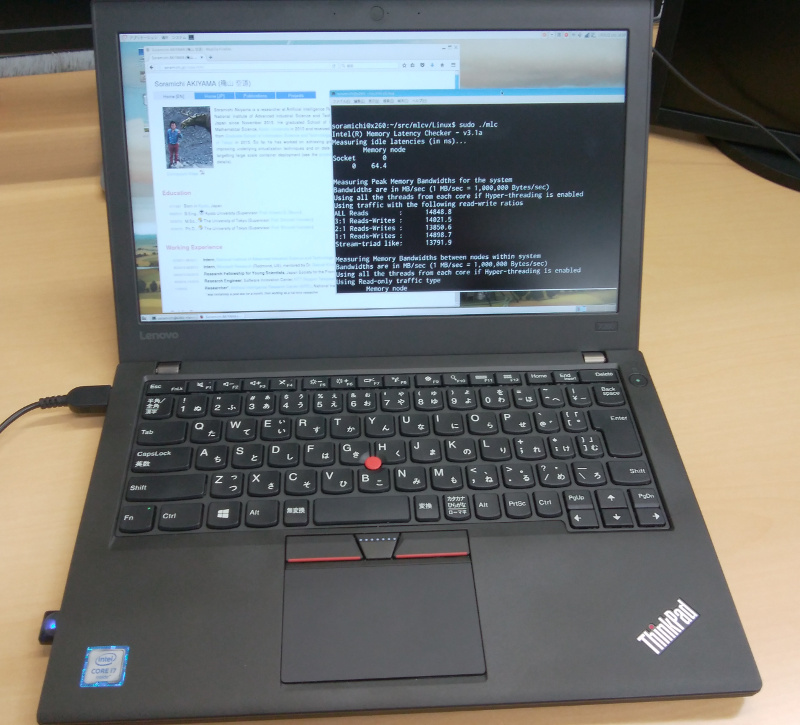 I basically followed normal operations. The point is to shrink C: using Windows tools and never let the Debian installer modify existing partitions. In this manner you can greatly reduce the possibility of committing a serious mistake.

Unfortunately the wifi inside x260 (Intel Wireless 8260) does not work with the linux kernel included in Debian 8. I upgraded the kernel to the latest stable (4.9) but then X got some error and did not work (the same actually happens with my desktop so it might be a problem between X and the latest kernel). For those who want to use a self-built kernel, an official guide from Debian is the most easy-to-follow.

Instead I just use WLI-UC-GNM2 from Buffalo that was sleeping in my desk. To make it work I had to add contrib and non-free repos to /etc/apt/sources.list and installed firmware-ralink package. After that it works perfectly with no command-line settings.

It works with the maximum resolution (1920 x 1080). Have never tried the HDMI port though. The brightness control buttons in the keyboard do not work in the default setting (I use MATE as my desktop environment).

They both work perfectly. Scrolling with two fingers on the touch pad also works.

Speaker and mic both work. The volume control buttons in the keyboard also work.

Currently it works normally, I mean I don't feel battery consumption is reasonably larger than Windows. Note: Having less battery life in Linux can actually happen because ACPI-related stuff is one of the most troublesome thing to support correctly; that's why hibernation never works in Linux. :p

I think the weakest part of Thinkpad X260 is the memory bandwidth. This machine only has 1 memory slot thus only 1 memory channel is usable (although the CPU has two channels). If you wanna do some big-data stuff or machine learning, I recommend you to buy T or X1 series (or something from other vendors) that have at least two memory slots.

As Intel Wireless 8260 is supported from kernel 4.1, it works with no hurdle with Debian 9 (Stretch, a.k.a testing, next stable). Note that you still have to install a non-free binary firmware (firmware-iwlwifi package from non-free repo). A drawback of installing the testing release (other than the fact security updates are not so often provided) might be the gcc version, which is 6.3 and can be too new for those who have ultra legacy codes written for gcc 3.x or even 2.x.

Something strange with Windows

When I was installing an anti-virus software into Windows 10 (not Linux), it seems like some of the input signals were dropped. Altough the load was extremely high for all components (CPU, mem IO, disk IO) at that time, this was I guess bit strange. What happened was during the installation the mouse cursor got extremely heavy, and it's not just delayed but some signals were definitely ignored, like a click of mouse was successful only with 75% of possibility.

I don't know if it is due to the hardware or a bug of Windows 10. It might be the case that Windows ignore some signals on purpose??? (It's not related to Debian, but this is very first time for me to see such a phenomenon so I put it here). One thing true is this has never happened so far in Linux, even with a very high load for example a kernel re-compilation.